It appears the biggest ever increase in 10 and 30 year Treasury yields / bond price declines ended on October 24.  In my opinion the rally in Treasury bonds has created on the best opportunity in years.   The timing is obviously tricky but prices should continue to rise as the economy weakens in 2023.

So with todays 50 basis point hike in the Fed Funds rate we have over 85% of all yield curves inverted.   This is a powerful indicator of problems ahead for both the economy and stocks.

The Federal Reserve can only control short term interest rates, they have no control over long term rates or bond prices.   So, while the Fed in their wisdom is raising short term rates despite sharply declining inflation data.   (Inflation peaked 6 months ago in June at 9% annual rate.  But the annualized CPI rate since June has just been 2.4%.  The Producer Price Index since June is 1.1% annualized.

Meanwhile the Fed and speakers like Chairman Powell keep talking about raising rates and keeping them higher for longer.  It’s as if they don’t comprehend that inflation data has already rolled over.   If they follow their words with actions this could be a significant policy error, leading to a much deeper recession.

Or, a major policy reversal prompted by weaker incoming data that grabs their attention.   It’s really impossible to predict and certainly not the time to put assets at risk.

The long term bond market is defying the Fed and essentially saying: “We can see where this is going to end up later next year since you’re still raising interest rates with the economy rolling over.  So we’re going to lock in our interest rates on bonds because the Fed will be cutting rates in 2023.”

The Treasury bond market is front-running the Federal Reserve.   Historically, the Fed has cut interest rates by 3 full percentage points or 300 basis points.   After todays hike the current Fed Funds rate is 4.5%.

“Never allow an investment with a positive return become a loss.”  Or, in this case don’t let my conviction on T-bonds prevent my exerting risk control. 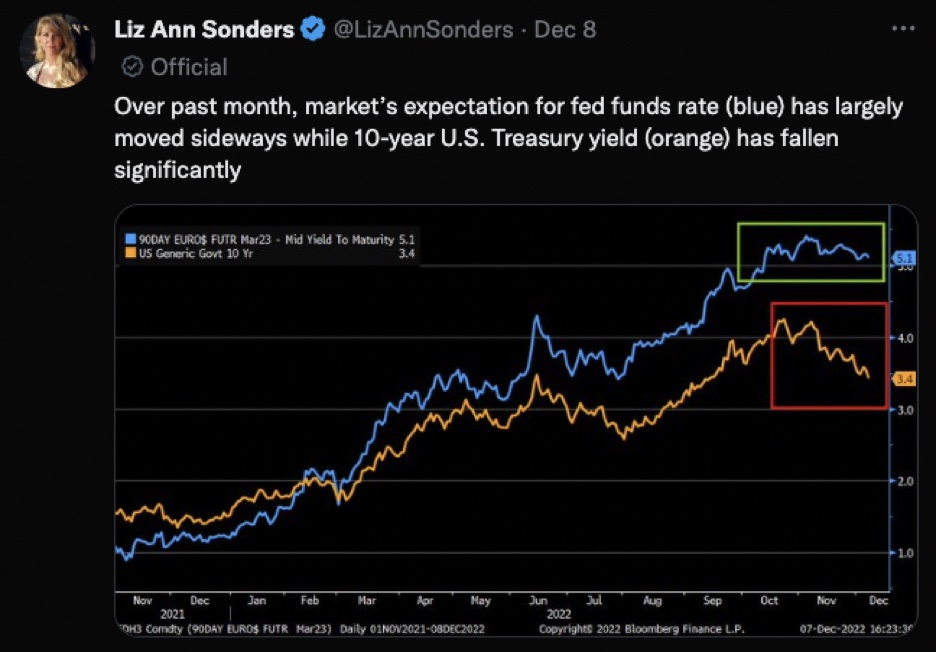 The Treasury bond market is screaming that recession remains the mostly likely economic outcome for 2023.    If you’re trying to be a long term investor right now, understand that the Fed is not your friend.   They are deliberately trying to put the economy in recession and drop the stock market by another 20% to 30%.

Please keep the chart above in mind when you see that Fed chair Powell said today: “I don’t think anyone knows whether we’re gonna have a recession or not – and if we do, whether its going to be a deep one or not.  It’s just not knowable.” 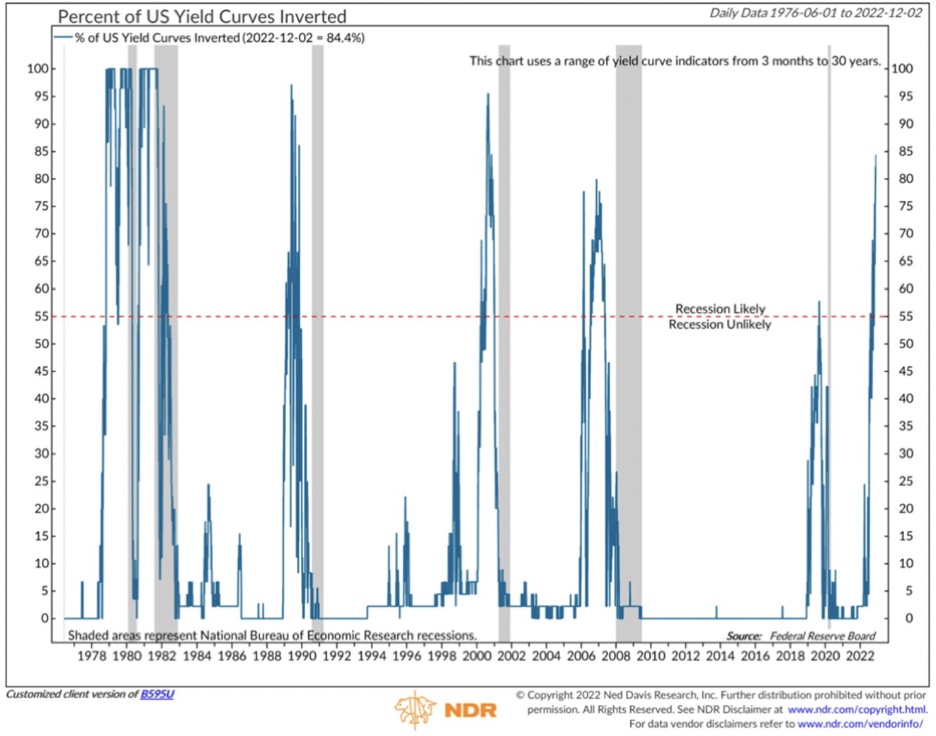 The late Bill Meehan taught me that predicting the future is a mugs game. The odds of market’s recovering in 2023 is good.  Both due to the length in time of this Bear market, the eventual return to positive monetary policy which is prompted by lower inflation.

But, timing is everything. It’s not my intention to try pick the bottom of any market, thats for the foolish and clueless.

The chart below is courtesy of Ned Davis Research.   Inflation has truly rolled over as seen below.   I doubt any Fed Governor wants to be remembered for a huge recession by raising rates into falling inflation.   So its possible we may have seen the last of rate hikes regardless of what the Fed says today. 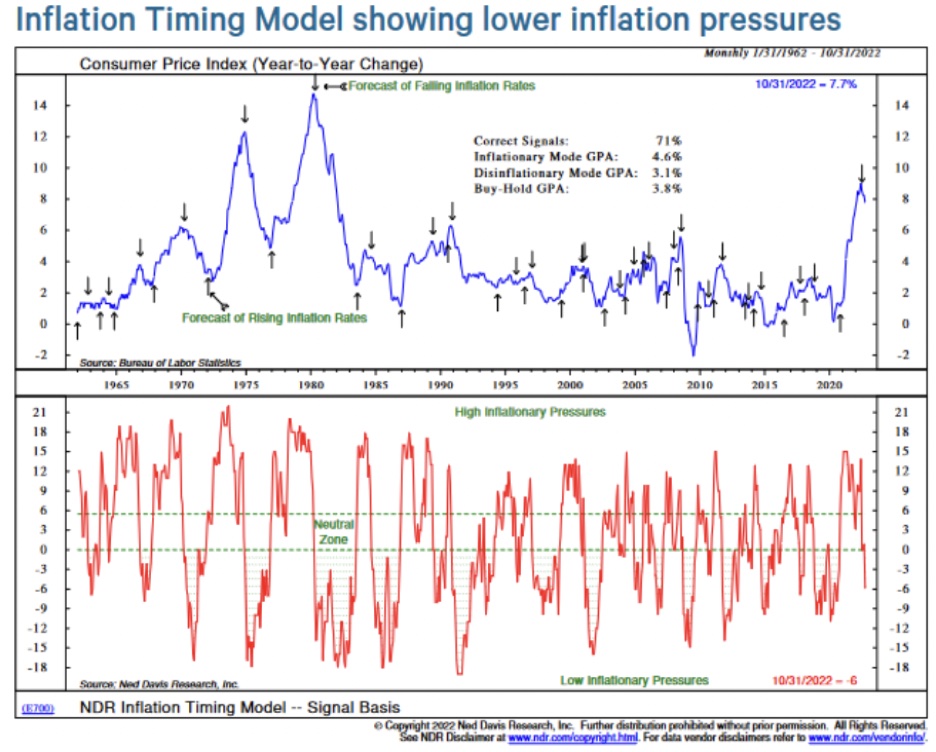 This final chart is once again from Ned Davis and it displays a very simple yet effective timing tool to judge when it will be safe to return in size to stocks. 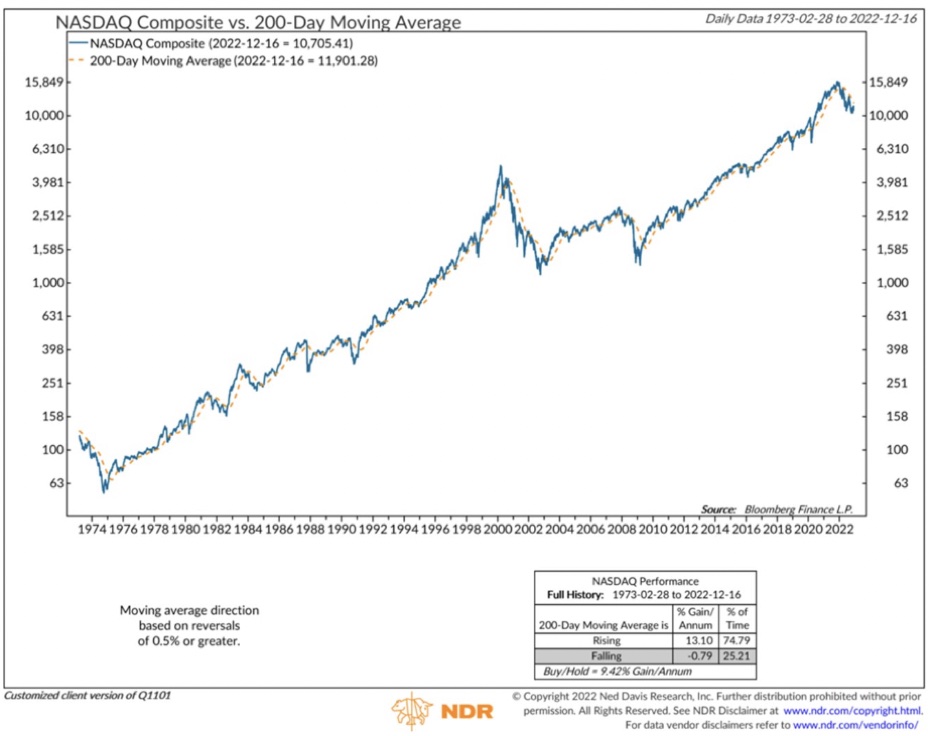 Current Nasdaq versus the 200-day Moving Average Trend (Down)

The trend remains lower for stocks in the long term.   If I were to guess as to how 2023 goes:  I’d be looking for a final stock market bottom in the first 4-5 months of 23.  Followed by a period of stabilization with a formative rally in the 4th quarter lasting multiple years.

Recently the state of California sent out a questionnaire to all registered advisors regarding our exposure to FTX and its cohort bankrupt imploded buddies.   We had 0%.  But the entertainment value of watching the revelations is tremendous.

Thank you for reading