The standard recession investment playbook is to hide in Treasury bonds while stocks and the economy sink into recession. That has not worked as we’ve been stopped out twice on Treasury bonds this year. The most recent sale of bonds in client accounts occurred when I learned that the June CPI (Inflation) data was going to come in HOT, 8.3% to be exact. From what I’m hearing the July number could be in the range of 8.5% but that could be subject to change.

Inflation could be slowing due to Demand Destruction. As in, the cure for high prices is high prices. High prices alone will cause disinflation (not Deflation) and the consumer decides to hunker down and cut spending.

The chart below is from the Atlanta Federal Reserve and it reveals what I’ve been saying for quite a while…..Recession is in our midst. Ignore Fed chair Powell and any other politician who avoids telling the truth. Biden’s polling number are bad enough so he’s going to try to put a positive spin on the economy. Just imagine if he told the truth and said to be prepared for imminent recession? Powell on the other hand is an unelected oﬃcial and he’s spinning the truth as well. 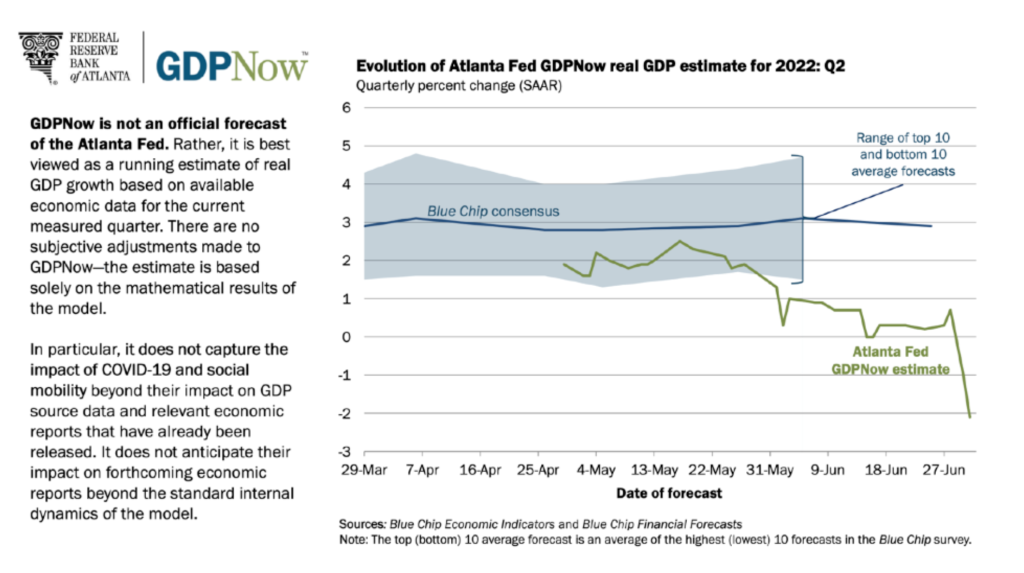 The Atlanta GDP Now data has gone below zero. This makes me think of The Who’s first hit single “I can’t explain”. I can’t explain how or why oﬃcials want to spin the truth. Then again, thats like screaming “fire” in a move theatre.

But here is the predicament the Fed faces: The Fed is raising interest rates into a weakening economy. Thats not the way it’s supposed to work. It’s like pushing over the Tower of Pisa.

The dilemma of the Fed remains a choice of two bad outcomes: If they continue to raise rates – the economy could go into a prolonged recession. If they fall short of raising rates enough high inflation will persist. Powell is on record that inflation is the higher priority.

The number of Fed hikes is not a static number. It’s been hovering between 7 or 8 hikes for months depending on the inflation data.

The current rate of inflation is not Biden’s fault any more that high gas prices. It’s a result of almost constant increase in money supply and stimulus since 2009.

As mentioned earlier, twice this year I’ve attempted to buy Treasuries but my timing was wrong. But now that Recession appears obvious. Many of the recession deniers 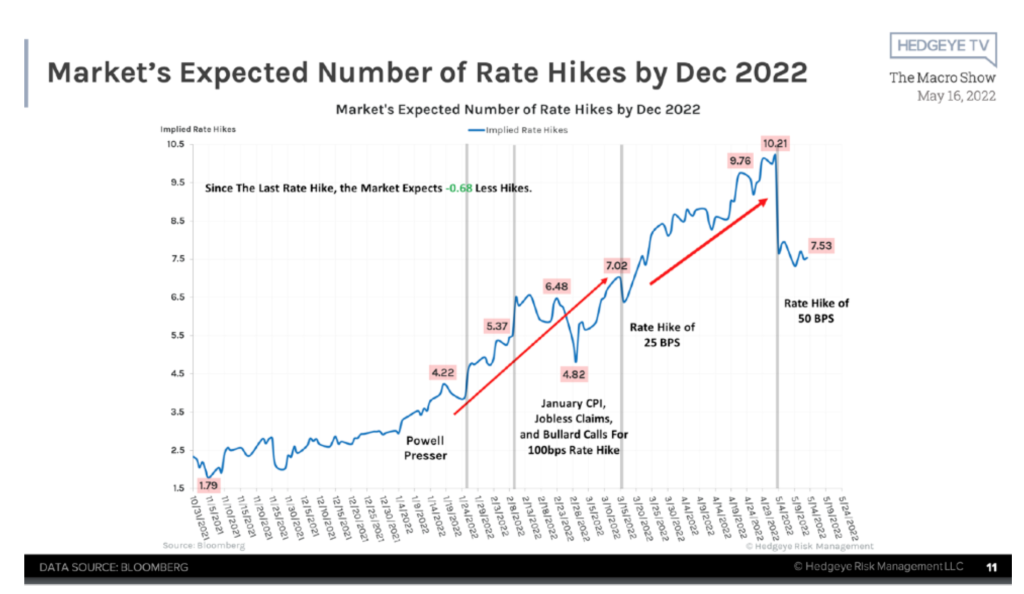 will look like idiots in a year but thats nothing new. On the bright side we may have seen a peak in interest rates. This implies that bond prices may be stabilizing.

It’s not just the incoming recession data that could cause stabilization of bond prices. The CPI might be peaking now as well. 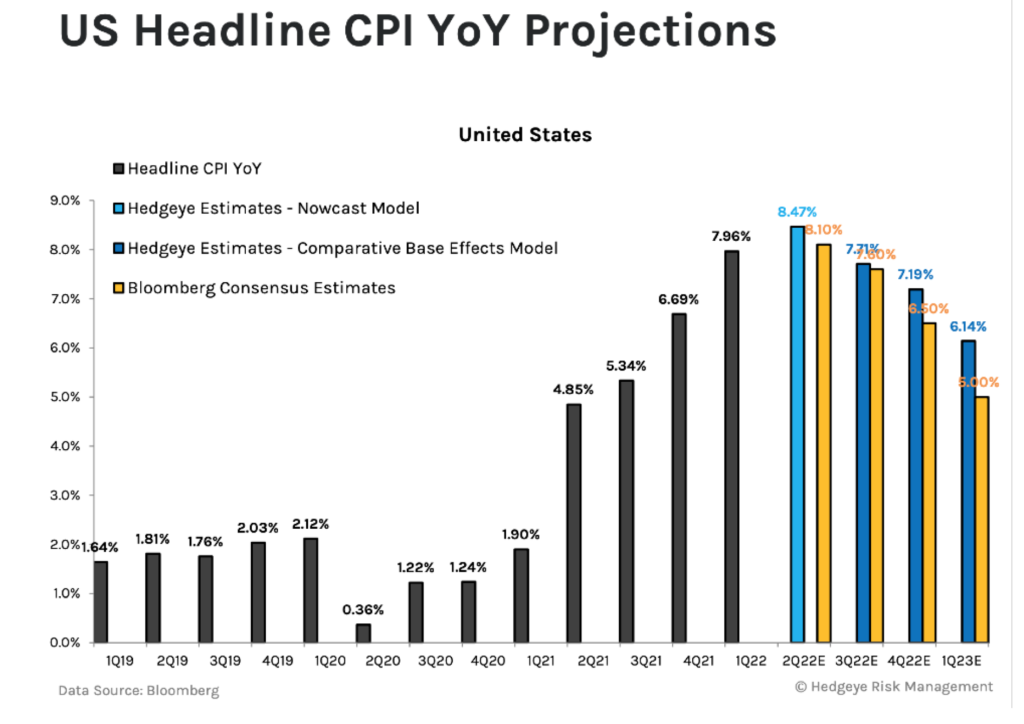 The chart below shows the yields on an array of bond maturities. It appears that it’s possible, maybe, with some luck, there’s a chance, cross your fingers, hopefully, that the bear market in bonds may be ending. Focus on June in the chart, yields may be rolling over and prices could stabilize or rally.

Investment markets are always forward looking, typically 6-9 months in advance. It doesn’t matter if its stocks or bonds. The markets are potentially reflecting early 2023 now. This is why the stock market will likely bottom out in the middle of the recession. 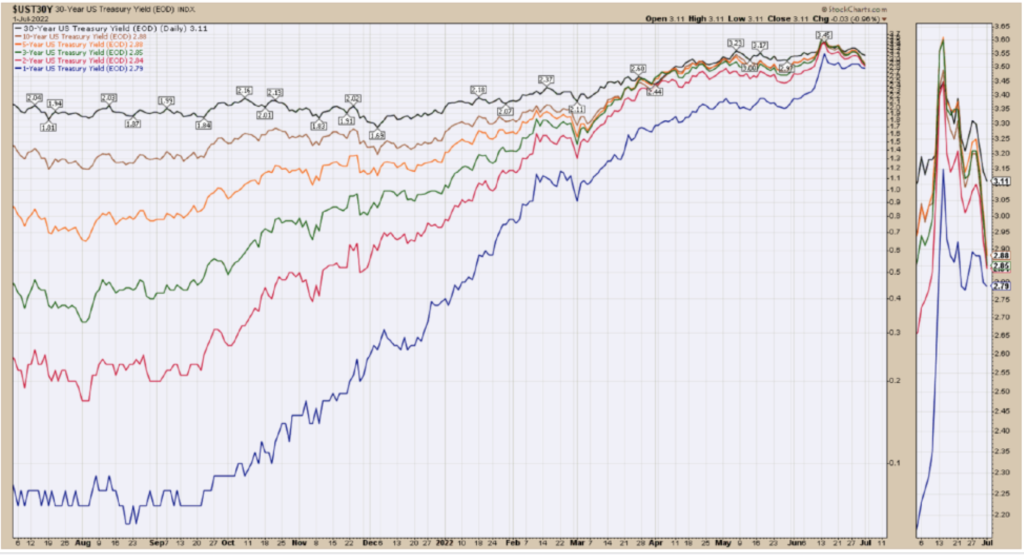 China: The Chinese economy has been in a prolonged contraction for well over a year. And, as is typical their stock market has been decline for almost a year and a half. So, prices have fallen quite a bit. But now China is the only major industrial economy that is currently expanding its money supply to stimulate the economy.

Since the Chinese central bank has begun to inject capital and lower interest rates the Chinese stock market is emerging from Bear Market to early stage Bull Market. Sources of growth right now in the world are rare and China stands out.

To say that China is controversial might be an understatement. But I’ve never screened for countries only for industries or businesses that do not meet the RMHI screens. So if you don’t wish to own anything from China just let me know. 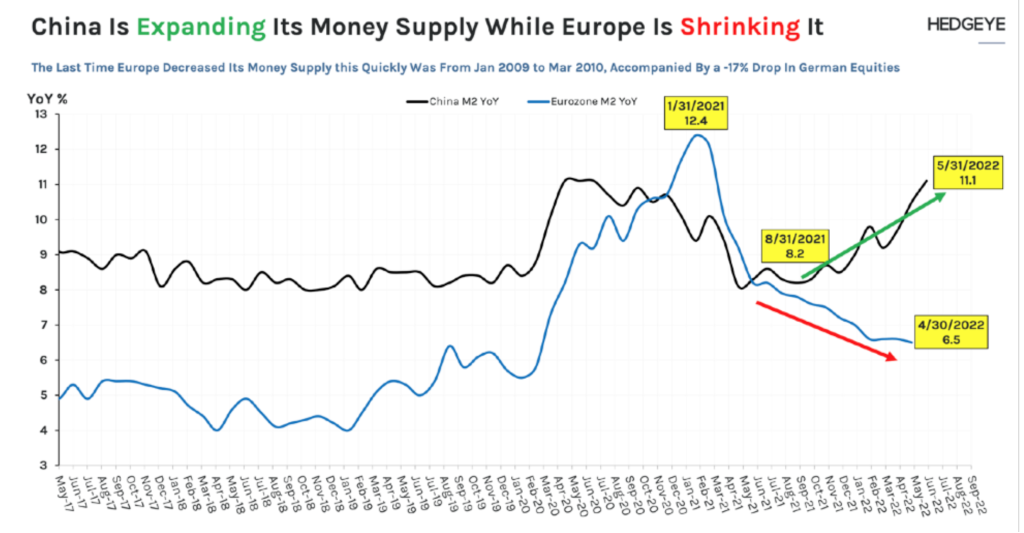 To be more accurate: Both Europe and the US are Shrinking their money supply.

We have had almost a perfect record trading in SARK with the most recent profit taken on Thursday. In my process I don’t like to buy anything all at once. I always assume the price of a purchase may decline after the initial buy. Of course, it doesn’t always work that way. The recent decline in SARK which I used to buy in was very short lived. I just took the profit as it was presented wishing we had more shares.

I’m thinking that we may be at the end of trading SARK for the time being. SARK is now showing a pattern of lower high prices and lower low prices – a negative development. SARK is sensitive to interest rates. Its best days were when rates were rising but if rates do decline Cathie Woods long national nightmare could be over. The opposite of SARK is ARKK aka Ark Innovation ETF and that may be forming a tradable bottom.

Cathie Wood’s ARK Innovation ETF may be forming a bottom. At minimum it’s no longer making new lows but may need time to “base”. A base is a prolonged period of sideways movement within a trading range.

Summary: Stocks remain in a Bear Market with the Nasdaq composite index down 28.5% year to date. The S&P 500 is down 21.1%. While I would really love to have our client account go into the green for the year we will likely need the Treasury bond market to behave in order to do so. Since our YTD loss is minor, it’s possible with the CPI peaking that bonds may have made a bottom in price and a peak in yield. But more time will be needed to confirm this thesis.

Stocks remain by and large untouchable except for short term periods. Every prolonged bear markets in the US has had rallies that lasted for weeks into months before the market rollover over once again. But this hasn’t happened yet. I am on the lookout for this since stocks that were crushed this year are showing some signs of stabilization: See ARKK.

China has likely ended their prolonged bear market due to Central bank stimulus. Despite this, China is not a place to make big allocations of assets.

While I believe there is hope for progress in the intermediate time frame the overall economic background remains negative. We may be at or near the point when bad economic news becomes good for Treasury bonds. Time will tell.