Years ago when I took my first college course in Economics I quickly understood that all things economic are correlated much like Dominoes. The first domino was Fed Chair Powell talking about aggressive rate hikes. The second domino was the May .50% rate hike, which was the largest hike in Fed Funds in 20 years. This domino tips over the slowing growth domino which tips over high stock and bond valuations and eventually hundreds of dominoes including housing, employment, wages, defaults, etc tip over in sequence.

The Fed had been telegraphing for many months that they were to embark on a series of rate hikes. Their goal was to increase the short term Federal funds rate from .25% to 3% in a year. That is an astronomical rate of change.

Any reasonably intelligent investor who understood what really moves risk assets and had an understanding of Fed policies could anticipate what would happen. The Feds job right now is to tighten financial conditions, slow down economic growth and that means lower prices for equities. In doing this the Fed will inevitably break stuﬀ.

In my opinion this period now is the worst set up for investing since the 1970s. In the 70’s we experienced higher interest rates and inflation and the scourge of disco. Stocks spent a decade in a trading range and finally broke out to the upside in August of 1982, when I was a gofer at Lehman Brothers Kuhn Loeb.

The decade of the 70’s was a prolonged trading range for stocks that showed no net progress for those who “Buy and Hold”. This is very unlike past decade which had the Fed as a massive tailwind to push stocks higher. The Fed tailwind is now over. The tools to succeed in a 70’s style investment backdrop are relatively simple trend following systems which I use.

Despite this backdrop Bank of America reports that individual investors have bought the dip in equities with the biggest inflows since December 2020. The ARK Innovation ETF (this periods poster child for reckless and suicidal investing) continues to see $1b plus inflows despite its free fall in value. Setting your money on fire has better entertainment value that watch the fund fall 4-10% a day. More later on below.

Last year I spoke many times of the lack of individual stock participation as the market indices moved higher. I was especially concerned when just a handful of stocks (Apple, Google, Microsoft, Netflix and Facebook) were propping up the market and not really an accurate measure of market health.

With that in mind and know what likely could happen I opted to pull back risk late last year. The market indices that showed glowing returns are in the process of being trashed. The Nasdaq 100 has now erased the entire 2021 return and is now working on eroding into the 2020 return. Many investors who owned individual equities have lost their 2020 gains as well.

The stocks that have seen the most damage so far have been the super growth companies with very high valuations and the meme stocks. But I have my eye on the mega-caps: Apple, Microsoft, Tesla, and Berkshire. If they rollover it increases the downside risk to the stock market since these are core holdings that you only want to sell if you’re forced to.

The selling has been very systematic with a majority of the selling coming from institutional investors and hedge funds. Many hedge funds are down more than -40% on the year. Based on the hedge fund bonus compensation standard – they won’t receive a bonus this year unless they can rebound 80% from the -40% loss. Since they’re way below their high water market with no realistic chance to earn a bonus, many are just doing mass scale liquidations on a daily basis with little concern for value or price.

In addition to the Hedge Funds we also have a generation of investors, retail or professional who worship at the cult of leverage and growth. This easily represents 95% of all investors. These are investors who are clueless or don’t care about Fed monetary policy and its domino eﬀects. It’s much sexier to talk up growth rates, earnings, revenues or moving averages or what Jim Cramer has to say.

It was common knowledge among those who understand monetary policy and macro economics that the ARK Innovation ETF was going to blow up. Tuttle Capital Management had the brilliant idea of mimicking the trades of the ARKK ETF by doing the exact opposite of the ARKK purchases. So they created the SARK ETF.

If ARKK held shares of Tesla with an 8% weight, SARK should short shares of Tesla with an 8% weight. Since ARKK trades are public Tuttle could see the trades within minutes ARKK is run by Cathie Woods and had developed a cult like following from her frequent appearance on CNBC and a very large media campaign. True story: I’m filling up at a gas station that had a TV screen on the front of the gas pump. And there I watched Cathie Woods talk about her collection of “innovative companies”.

In general she has been a hype-master for her ETF with claims of outrageous returns going forward. But in truth for her entire career she has only had one superior performance year, 2020. Her ETF benefitted from and extremely aggressive Fed that acted like a hurricane of a tailwind.

The issue with ARKK is that when the Fed raises interest rates to slow down the economy the shares of the fastest growth companies that have the highest valuations get hit the worst. Many of her holdings will fall 70% or more. And, the ARKK is loaded with just those types of stocks.

It’s the classic Wall St. story where massive hubris with a touch of sociopathy is devastating the people who invest with her.

ARKK shares in full crash mode.
(Should be renamed Titanic)

Here is a chart of SARK which started trading in November. I did not discover it until late March and it has been a great success. We’ve round trip traded it 4 times and all at a profit. But it’s volatile so I don’t want to hang on to it other than for short periods of time. Our most recent cost basis was approximately $52 and I’ve been selling and buying back. The most recent sale was at $70.5.

ARKK is likely to make a violent leap higher very soon. So I’d be a buyer once again of SARK when it pulls back.

Green Brick Partners owns and develops single family homes in the Dallas and Atlanta areas. It has a fantastic balance sheet and 35% earnings growth this year. The stock came down hard when interest rates rose due to mortgage aﬀordability, etc. But it’s now a beneficiary of short term rates turning lower.

Trinity Capital is a business development company that oﬀers debt financing to corporate clients. The shares have a 8.9% yield which oﬀers some downside risk protection. But for social investors it oﬀers something else entirely.

Buying the stocks of companies like Oatly or Beyond Meat has proven disastrous to any kind of investor. Part of the reason is those two companies don’t have a moat to protect them from competition.

Trinity oﬀers debt financing to some of the most progressive companies in the US. Trinity went public early in 2021 so its still largely unknown. For quite a long time I’ve been looking for investments that are both relatively safe, provide cash flow and are progressive.

Since debt service is a higher priority than equities if a company comes into financial trouble the debt holders get paid for first before shareholders. The upside for debt is not as infinite as it can be for stocks. So in return it oﬀers more protection.

A few of the companies Trinity has financed.

Treasury Bonds and the Dollar

A month and a half ago I was too early with bond purchases and took a loss. Based on data it was the largest decline in Treasury prices in US history. But the collapse of risk markets and the slowing economy has caused a drop in the expected rate hikes from 10.2 to 7.53. In other words, the chances of the Fed raising rates to 3% is falling. This has caused Treasury bonds to stabilize and reverse course with higher prices. 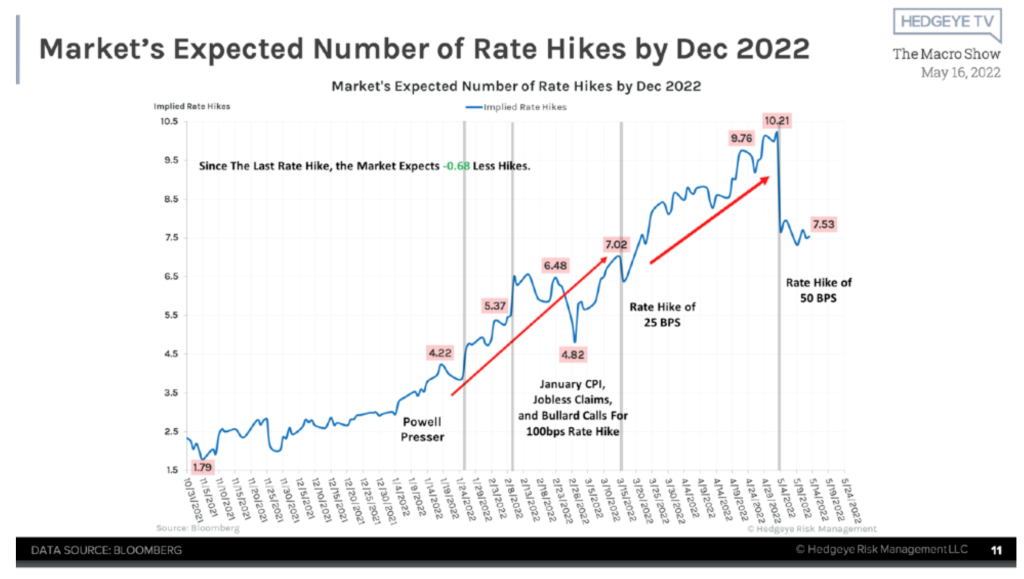 Since the US dollar is the world’s reserve much of the worlds foreign debt is in USD regardless of the issuer. This also means that converting currencies into USD is a safe haven investment in a world of financial disorder.

The USD is also one of the best performing asset classes during recessions which I expect to arrive late this year or early next. It’s never a matter of IF a recession will arrive its a matter of when. The USD or USD ETF “UUP” has a -93% correlation to the S&P 500 this year. UUP should continue to rise as stocks fall.

In Summation: Market Volatility has reached a level of intensity where no rally can be trusted and the path of least resistance is down. In due time this will lead to a huge market rally but thats still many months away.

The US and world economies have slowed while in the midst of a multi-decade high in inflation. The Fed’s recent rate hike was the largest in 21 years (a dagger in the Dotcom bear market of 2001-2002).

The Fed has made inflation as its #1 priority but in doing so it will come at the risk of a further crash in the stock market. Jerome Powell indicated he expects two more hikes of .50% in the forthcoming meetings. Plus, the Fed will begin “quantitative tightening” in June – this means the bonds the Fed has been buying (which puts cash into the system) will be allowed to mature without replacement. If they stick with this plan it might be the most aggressive rate hiking policies since the early 1980’s.

The Nasdaq composite index peaked in November at 16,121 and sits today at 11,757 a decline of 27%. But the damage to individual stocks has been much more severe. Declines of 75% to 90% will be common. Bitcoin has been taken to the woodshed and it may never return.