Does this rally have legs?

The last decade will be known as the Decade of the Big Tech Growth Stocks. A temporary period where investors deluded themselves into thinking the only stocks worth owning were shares in Technology: Amazon, Apple, Facebook, Microsoft, Google. These stocks represented approximately 23% of the S&P 500 Index.

This is not the first time its happened since human psychology tends to repeat itself. In the 1970’s there was the “Nifty Fifty” and you’re going to have to be of a certain age to remember these names. (Remember people thought they could buy these stocks and hold them forever. Many don’t exist anymore.)

Just 22 years ago another generation of must-own stocks represented 18% of the S&P 500.

In this group only Microsoft and Exxon were able to maintain relevance. While Cisco remains a viable company the stock has yet to exceed its year 2000 high. 22 years is a very long time for dead money.

As for 2023 investors should expect no diﬀerent.

The point I’m trying to make is that is common for investors to look at past favorites in the hope they’ll be future top performers. But it’s a very flawed strategy in real time. If you remember my letters from last year a high percentage of money was flowing primarily into Big Tech. Now the reverse is happening. The migration of capital out of Big Tech continues and that money is moving to the Russell 2000 Index composed of smaller company stocks which underperformed while Big Tech was dominating for the past decade.

If I were to guess I would say that we’re in the 7th inning of this Bear Market. 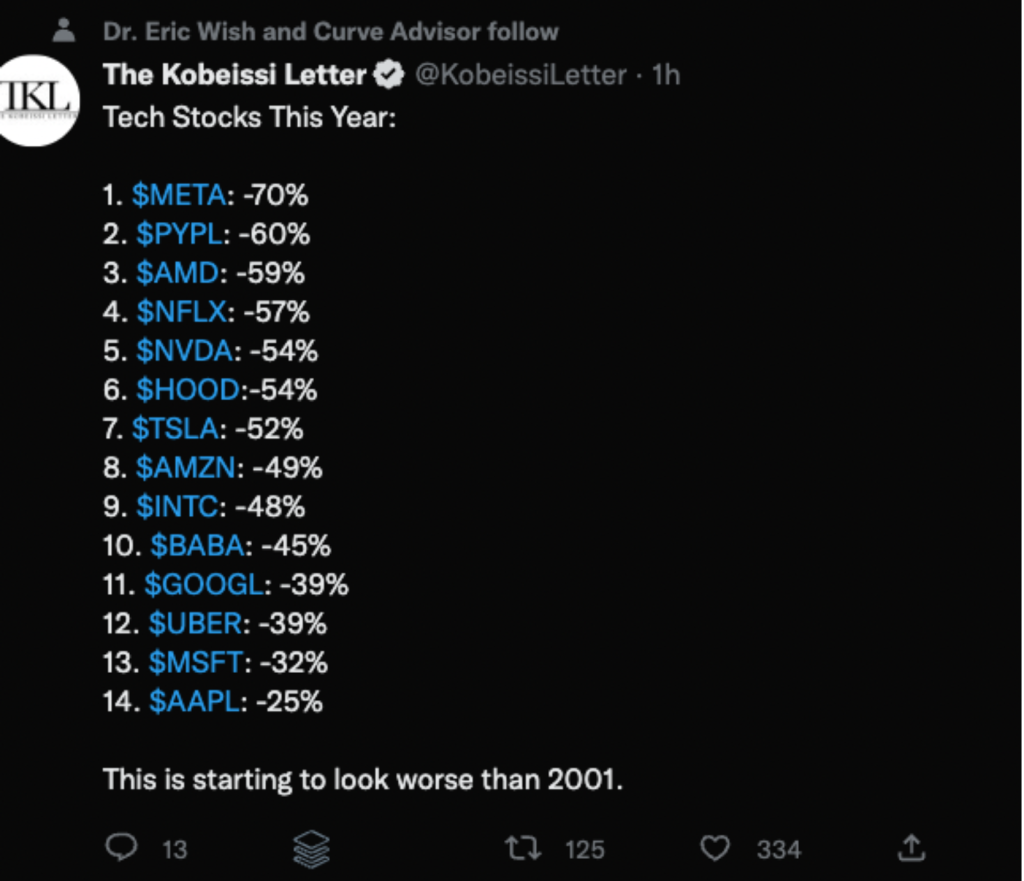 A short term Buy signal for stocks. (But not Big Tech)

MACD short term buy signal (Moving Average Convergence Divergence). Created by Gerald Appel in the 1970’s which shows changes in direction, momentum and strength of a stock or a market index. Longer term signals remain “out of the stock market”. But, short term signals are always the first to turn negative or positive.

New market leadership and a new trend will emerge as it always does. If a new Bull Market for stocks was to begin the stocks of smaller companies might be where it begins.

Last month was extremely negative and investor sentiment was awful. This generally bodes will in the near term future results and at least a short term rally has occurred. I’m playing it very conservative with companies that are non- cyclical or not very sensitive to the economy.

We are only invested minimally in the strongest sectors and industries, primarily healthcare and insurance. Every stock we own has done well this year on an absolute and relative basis. I no desire to try to catch falling daggers aka tech stocks.

This mornings CPI inflation data came in below expectations as the year to year came in at 7.7% versus a forecast of 7.9%. The market exploded to the upside on this news with the Dow exceeding 800 points in less than a minute.

Fed chair Powell has said he’ll be watching the data closely as a signal for when they can minimize interest rate hikes. Markets are possibly pricing in an end to the hikes earlier than expected. If todays data is the start of a trend to lower inflation it would be a positive for both stocks and bonds. Longer term the Fed can move to a more accommodative policy in 2023.

Much of the biggest movers today to the upside are beaten down past leaders that are still in strong downtrends.

There is no need to chase stocks or bonds higher at present. If this rally has legs there will be ample opportunity to rebuild portfolios for a new Bull run.

Thank you for reading